From Cvillepedia
(Redirected from Emancipation Park)
Jump to: navigation, search 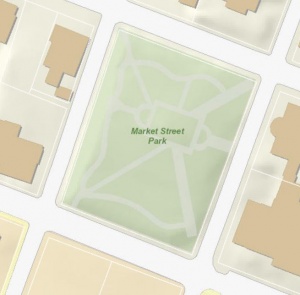 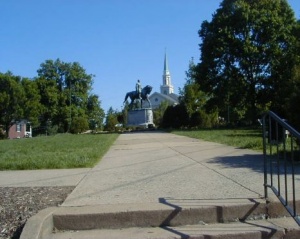 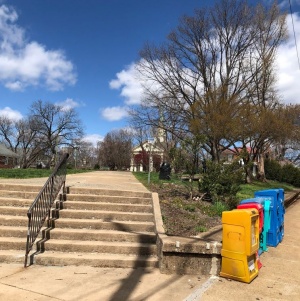 View of the park from E. Market Street steps, March 2022 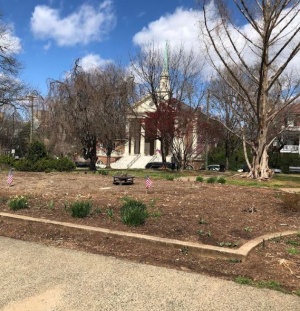 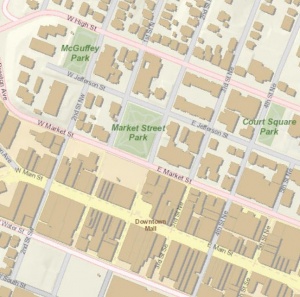 Overview of parks in the Downtown area, ca. 2022

Market Street Park is an urban park located in Downtown Charlottesville. Covering slightly over 1.04 acres, the large equestrian monument of Robert Edward Lee mounted on his horse Traveler, by Henry Merwin Shrady (1871-1922), was once the focal point of the park (1924-2021). Market Street Park is owned by the City of Charlottesville and is managed by the Department of Parks and Recreation.

Main attractions include landscapes xeriscape garden plantings, ornamental trees (including a weeping cherry and dogwoods) and at the center of the park a fire pit. Market Street Park is traversed by a system of formal walkways and is served by public transportation.

A large equestrian monument of Robert Edward Lee mounted on his horse Traveler, by Henry Merwin Shrady (1871-1922); completed by Leo Lentelli (1879-1961), once the focal point of the park, was removed on July 10, 2021. The statue is listed on the National Register of Historic Places.[2] Surrounding the area where the statue was once located are xeriscape garden plantings, and ornamental trees including a weeping cherry and dogwoods.

The city's comprehensive plan classifies the property as an 'urban' park.[3] The park is often used for festivals and music performances, and was the site of the Occupy Charlottesville protest. The western side of the park is used as seating space for the Garage.

Paul Goodloe McIntire, a commodities trader and philanthropist, assembled several parcels of land, purchased and demolished existing buildings, developed the property and then deeded the land as Lee Park to the city in 1917 specifically in order to erect the statue of Lee; he donated the completed statue seven years later in 1924.[4]

On March 14, 1918, at the regular monthly meeting of the Common Council, Mayor E. G. Haden, transmitted to the Charlottesville City Council, 1916-1918 the following communication received from Paul G. McIntire: "New York, Feb. 25, 1918. Hon. E. G. Haden, Mayor, Charlottesville, Va. Dear Mr. Haden: It is a great pleasure to me that the City of Charlottesville accepted the Park and Monument in memory of my parents, and I feel that in the great crisis through which we are now passing that the thought of Lee will help us to do what he considered the noblest word in the English language, “OUR DUTY”. I have the honor to remain, Sincerely yours, Paul G. McIntire." (Note: The Armistice - an agreement to stop fighting - was signed between France, Britain, and Germany on November 11, 1918, bringing four years of fighting in the First World War to an end.)

An artist recommended to McIntire by celebrated American sculptor Daniel Chester French, Henry M. Shrady, created the original conception of the statue.[4] But Shrady died before casting it. His last words were “keep the canvas wet-- keep the canvas wet." His doctors and nurses thought he was delerious, but in fact he was entreating them to keep wet the canvas cover over his preliminary clay model of the Lee statue. Unfortunately over the next months the clay dried out, cracked, and the model was lost.[4]

Shrady was replaced by artist Leo Lentelli, who patterned the design of the sculpture on an existing memorial to Lee standing at Gettysburg. Lentelli took pains with accuracy, including traveling to Richmond to measure Lee’s equipment "down to the galleons on the General’s sleeve.”[4]

The bronze was cast by Roman Bronze Works. McIntire had hoped to use melted down Confederate cannons for the sake of sentiment, but there were none to be found in 1923. Walter D. Blair, architect, designed the granite pedestal for the statue. McIntyre had suggested a dedication to his mother Catherine McIntire but it was omitted from the pedestal's final design. There was no inscription, other than the simple name Robert Edward Lee, because it was thought "any other wording or decoration would be superfluous."[4]

The statue was unveiled at a ceremony May 21, 1924 by Mary Walker Lee, the three year old granddaughter of General Lee. University of Virginia President Alderman made the speech of acceptance at the dedication ceremony, saying:

“Here it shall stand during the ages at the center of our lives, teaching, through the medium of beauty, the everlasting lesson of dignity and character, of valor and unselfish service . . . in the majesty of his manner. And now, in this hour of reunion and reconciliation, we know how . . . he symbolized the future for us as it has come to pass, and bade us to live in it, in liberal and lofty fashion, with hearts unspoiled by hate and eyes clear to see the deeds of a new and mightier day.”[4]

In 1948, the traffic committee of the Chamber of Commerce sent a letter to Mayor Roscoe Adams suggesting that Lee Park and Jackson Park could be modified to accomodate spaces to alleviate a parking problem in downtown Charlottesville. The letter was read at Council's meeting on March 15, 1948 but Council took no action. City Attorney L.W. Waddell said the idea could present legal problems given McIntire's gift. Adams then mentioned he had heard of a possibility to construct parking spaces below the parks.[5]

The underground parking idea was still a concept in 1951 and subject of a Daily Progress editorial.[6]

Use of the park 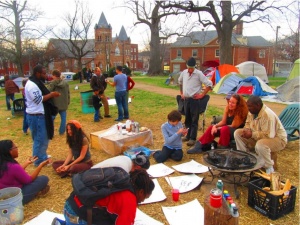 The park has also been the site of protests. The group Occupy Charlottesville began a protest campaign in mid-October 2011 which involved setting up tents. The city granted a series of permits allowing the occupation which expired on November 24, 2011.[9] The ongoing occupation prompted questions whether the city showed favoritism by allowing the group to stay in the park so long.[10] The city evicted protestors on November 30, 2011 and 18 people were arrested.[11]

At the 2012 Virginia Festival of the Book, City Councilor Kristin Szakos raised questions over whether the Robert E. Lee statue in the park should be removed out of a concern it celebrates the state's Confederate past.[12] The proposal was met with considerable backlash from the community, who view the statue as an important part of history.[13][14] More recently, in March 2016 the issue of moving Confederate statues was revived.[15][16]

2018 reconsideration of the new name

Local resident Mary Carey expressed displeasure with the name, as it did not reflect the community's input and continued to center slavery. Carey felt that "Emancipation Park" was a blunt reminder of slavery, and bitterly ironic, considering "Emancipation" Park had been created for the specific purpose of housing a statue of someone who fought against emancipating the enslaved. She submitted a petition asking Council to reconsider it. They chose to do so on February 20, 2018.[1][21]