From Cvillepedia
(Redirected from Election 2017)
Jump to: navigation, search

This page is an overview of the 2017 local elections

A general election for statewide and local races was held on November 7, 2017. The primary elections were held on June 13. [1]

Two seats for Charlottesville City Council, three (unop) seats on the Charlottesville School Board, and other city offices were up for election. Four constitutional offices - Commonwealth's Attorney, Treasurer, Sheriff and Commissioner of the Revenue were all uncontested in the general election.

Two seats were up for City Council and at least two new members of City Council would be chosen in the general election from among the two Democrats and four independents on the ballot. 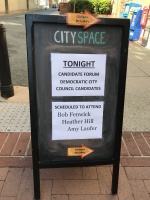 On election day, Walker made history by becoming the first independent to win election to Council in almost 70 years. Hill placed second and was elected, but fellow Democrat Laufer came in third.[6]

Walker set the record number of votes received by any one candidate in city history. According to former Democratic Mayor Dave Norris, who supported Walker’s campaign and encouraged people to vote only for her, it is the first time an independent has been elected to the council since 1948.[7] (Bullet voting, also know as single-shot, is a voting tactic, usually in multiple-winner elections, where a voter is entitled to vote for more than one candidate, but instead votes for only one candidate.)

Voters could cast two votes, one for each of the two seats available, hence the percentages do not total 100%. Election records[8] show that 27,219 votes were cast at this election for the office of city council. In the election, two City Council seats were open, allowing each voter to cast as many as two votes.

Hill announced her candidacy for the Democratic nomination on February 21. [9] Laufer announced on Feb. 28. [10]

Fenwick announced his candidacy for re-election on March 29, 2017. [11] He has been endorsed by the group Equality and Progress in Charlottesville. [12]

Each voter could vote for up to two candidates.

Woodson was the first candidate to file paperwork in 2017. [14] He did not make a formal announcement.

Transportation activist Long did not hold a formal announcement for his 2017 run. Instead he coordinated a protest of a tax incentive project for the Landmark Hotel on the Downtown Mall. [16]

Carpenter made her formal announcement at Washington Park on April 1. [17]

Jackson launched his campaign at Tonsler Park on May 12. [18]

Clifford Hall and Clawson filed their initial paperwork in May. [19] John Edward Hall was the final candidate to submit paperwork. [20]

Clawson ended her candidacy on September 1 by filing paperwork with the city registrar. [5]

The Charlottesville School Board seats held by Ned Michie, Leah Puryear and Juandiego Wade are up for election in 2017. Wade and Puryear will seek reelection, but Michie did not. [15] Newcomer Lisa Larson-Torres received the most votes.

There is no opposition for Commissioner of Revenue Todd Divers, Treasurer Jason Vandever or Sheriff James Brown.

There were two contested school board seats and one contested supervisor race.[26]

Incumbent supervisor Diantha McKeel announced she will seek a second term on the board on March 1, 2017. [27] In 2013 she ran as an independent but is running as a Democrat this time around. McKeel was officially nominated by the Albemarle County Democratic Committee on May 15, 2017.[26]

The Albemarle County Republican Committee did not nominate a candidate to challenge McKeel.[26]

No independent candidates have declared their candidacy.[26]

Incumbent school board member Kate Acuff will seek a second term on the board. She has no opposition.

Incumbent supervisor Brad Sheffield, a Democrat, is not seeking a second term. Ned Gallaway announced his candidacy for the Democratic nomination on March 8, 2017. [27] He officially received the nomination on May 15.[26]

There is not a Republican candidate for this seat.[26] No independent candidates came forward.[26]

School board member Pam Moynihan announced she will not run for another term. Mary McIntyre and Katrina Callsen are running against each other for office for the first time as candidates for the Rio District seat. [30][31]

John Lowry announced his campaign for the Republican nomination on February 23, 2017. [32] The Albemarle County Republican Committee officially nominated Lowry as their party's candidate on May 16.[26]

Incumbent Liz Palmer a formal announcement for-reelection in March. She received the Democratic Party's nomination on May 15.[26]

This race is the only supervisor race that is contested.

Graham Paige will seek a full four-year term on the school board. He is being challenged by Julian Waters, a high school senior at Western Albemarle High School. [31]