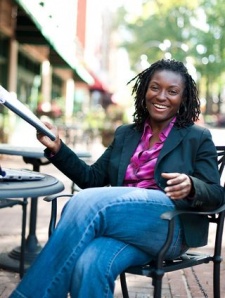 Ebony Walden is a former neighborhood planner who works in Charlottesville's Department of Neighborhood Development Services. Walden is also a poet active in the community[1]. Walden spent eight months on a "Poetic Justice World Tour" to "channel the creative power of poetry in order to give voice to the world’s impoverished and disadvantaged communities".[2] Her last day was on August 6, 2014.

Walden was born and raised in New York, spending her early years in Queens and moving to Long Island at age 8. She graduated from college in 2002 from Georgetown University and stayed in Washington, D.C. to complete a poverty fellowship called the Congressional Hunger Fellows Program while also working at the Hudson Faith in Communities Initiative.[3]

Walden originally came to Charlottesville from Washington, D.C. in 2003 to participate in the Trinity Fellows Program, a Christian leadership development program. She also studied urban planning at the University of Virginia, graduating in 2006. She got her start in the city government with an internship with Neighborhood Development Services in 2005. She has also volunteered with The Haven during her time in Charlottesville.[3]

In Charlottesville, Walden has lived in both Fifeville and North Downtown.[3]