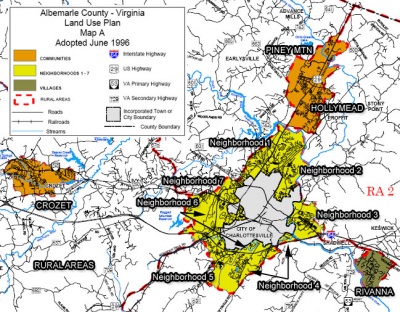 The Albemarle County Comprehensive Plan calls for the division of the county into two categories: areas designated for development and areas that are rural in nature. The Designated Growth Area comprises five percent of the county and is largely clustered in the urban ring around Charlottesville. However, other pockets of development area outside the urban ring include Crozet and the Village of Rivanna. Albemarle County's Land Use Plan, a section of the County's Comprehensive Plan, designates 35 square miles of the County as Development Areas.

The development of the designated growth areas is to be shepherded by the creation of Master Plans. Currently, the County has only adopted specific master plans for Crozet, the Pantops area and the Village of Rivanna. The Comprehensive Plan update in 2015 created an advisory council for the southern growth area to be known as the 5th & Avon Community Advisory Committee.

The goals of the establishing the growth areas are[1]: