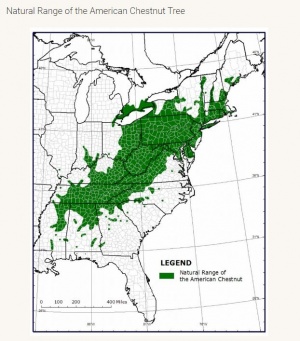 The American chestnut tree reigned over 200 million acres of eastern woodlands from Maine to Florida, and from the Piedmont plateau in the Carolinas west to the Ohio Valley, until succumbing to a lethal fungus infestation, known as the chestnut blight, during the first half of the 20th century. An estimated 4 billion American chestnuts, up to 1/4 of the hardwood tree population, grew within this range.

Chestnut Street is a short north-south residential street (16 of the 16 parcels on this street are zoned R-2). It is part of a group of themed streets in the Belmont-Carlton neighborhood carrying the names of native Virginia trees. The American chestnut was once considered one of the most important forest trees throughout its range and the finest chestnut tree in the world. It was also grown in towns and around homes because of its beauty. By 1950, three and a half billion American Chestnut trees were killed by the Chestnut Blight.

The American chestnut was once a common dominant tree in the deciduous forests of eastern North America. In some parts of the Appalachians it was estimated to comprise 25% of the timber volume. Growing to a diameter of up to 10 feet and a straight height of 100 feet, the chestnut had many valuable properties. Its wood was easily split, easily worked, and highly rot-resistant. Tannins from the bark and heartwood were the best available for tanning heavy leathers. A consistent production of annual nut crops, in contrast to the sporadic acorn crops of oak, made the chestnut an important food source for man and wildlife. Even-aged stands at village sites suggest that chestnut was planted and cultured by Native Americans.

The Chestnut Blight was first reported in New York in 1904. By the mid-1920s, the disease was rapidly spreading south and north through the Appalachian Mountains. By the 1950s, the American chestnut was wiped out throughout its range. Because the wood is rot resistant, the trees were useful for many years after they died. However, the wood did suffer insect attacks by small borers which chewed pin sized holes in the wood. Given the name “Wormy chestnut", the wood sawn from these trees was widely used as building material and is still available today.

In mid-September 2020, Charlottesville Area Tree Stewards (CATS) weeded and mulched some 80 trees at the native tree arboretum on the grounds of the Virginia Department of Forestry at the Fontaine Research Park. Over the past six years, CATS has collaborated with the Department of Forestry to plant 35 native tree species on this site, including sassafras, silverbell, yellowwood, river birch and an American chestnut hybrid designed to resist the devastating chestnut blight. Many of the trees are labeled with QR codes that allow visitors to go online and learn more about the species. [1]