The City of Charlottesville obtained its present Charter from the Virginia General Assembly effective July 1, 1946. Originally established as a village and then a town, Charlottesville incorporated as a town in 1801 and a city in 1888. Charlottesville was governed by Board of Trustees, a Bicameral Common Council, then a Board of Alderman, and in 1928, the present Council-Manager form of government was established.

The Charter of the City of Charlottesville acts like a constitution for the city. It is the basic document that defines and codifies the organization, powers, functions and essential procedures of the city government. As with each city in the Commonwealth of Virginia, Charlottesville has its own charter enacted by the Virginia General Assembly (in Richmond) which gives distinct governmental attributes. 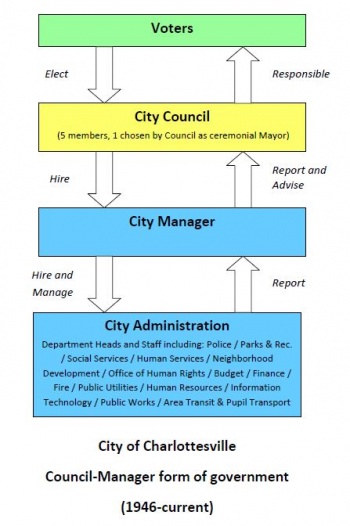 The General Assembly creates counties, towns, and cities by issuing specific charters to municipal corporations, or defining procedures for communities to incorporate. The official charter of a locality is the Acts of Assembly chapters that create and amend the charter. The following are various selected Acts passed at a General Assembly of the Commonwealth of Virginia related to Charlottesville.[1]

New Charter: Charlottesville incorporated as a town in 1801.

The municipal authorities of the Town of Charlottesville consisted of a mayor and four alderman, who were elected annually on the fourth Saturday in February. Acts passed at a General Assembly of the Commonwealth of Virginia.

The Constitution of 1869, and in the enabling legislation passed in the 1869–1870 General Assembly session, required that each county be divided into townships, and the enabling act stipulated that the commissioners appointed to lay off the townships (later changed to magisterial districts) should not include therein any town or city with a population of 5,000 or more.

New Charter: Charlottesville incorporated as a city on September 1st 1888. The first city charter provided for a biennially elected mayor and twelve member board of alderman (three alderman were elected from each of the four wards); and seven other elected officers. (Charter, 1899-1900, c. 1012; repealed, 1946, c. 384.)[5]

From 1722 until 1892, towns became cities only by act of the General Assembly, which issued a city charter in the form of a statute; after 1892 a town could also incorporate as a city by petition to the circuit court.

On August 1, 1916, Charlottesville became a city of the first-class with the annexation of over 2,500 acres of Albemarle county territory and suburbs surrounding the city. More than tripling in land size, the city's the population exceeded 10,000.

The Virginia Constitution of 1902 defined first-class cities as those having a population of 10,000 and required such city's Legislative government to consist of a two chamber city council composed of 4 Alderman and 8 Councilmen.

New Charter: Chapter 384 of the Acts of Assembly of 1946 repealed all previous charters and provided a new charter organizing the City of Charlottesville under a council-manager government, a change from the Modified Commission form of government that had been in place since the 1922 Charter. Basic features of current council-manager government under the 1946 charter: The city-manager, city council, and mayor work together to enact budgets, to draft and enforce legislation, to provide city services, and to oversee city departments and appoint departmental heads.

No fewer than four different charter documents have been used before, and there have been unsuccessful efforts at several points in Charlottesville's history to propose the adoption of alternate charters.

Commission government: The city council, at its special meeting the evening of February 13, 1912 approved the amendments to the charter and requested the senator and delegates from this district in the Legislature to have them enacted into law. The effect of these amendments would be to provide for four commissioners, elected by the people, to take over the administrative functions then enjoyed by the council and to leave the body in possession of the merely legislative power, including power to levy taxes, impose licenses and to make appropriation of the revenue as at present. [10]

HB 1107 Charlottesville, City of; amending charter, city organization. The following amendments to the 1946 Charter were introduced by Delegate Sally L. Hudson (D) - House District 57 and approved by the General Assembly on April 7, 2020. Amendments went into effect on July 1, 2020:

By Ordinance, Councilors made $18,000 a year and the mayor made $20,000 a year; the maximum range allowed under state guidelines.[11] The 2020 Charter amendment brought the city code in alignment with ordinances passed by the Charlottesville City Council (2004-2006).

December 3, 2018 - On a motion by Wes Bellamy, seconded by Kathy Galvin, the Charlottesville City Council (2018-2019) voted 3-2 to allow the city to operate outside of state guidelines for mayor and councilor pay. Delegates Toscano and Bell opposed city charter changes, dooming salary proposal for the 2019 General Assembly session.[12]

In lieu of the of the whole city council (five members), the city manager is to be appointed by a majority vote of the city council. (§ 5.d)

Council's power To restrain and punish drunkards, vagrants, mendicants and street beggars. (Repealed, text is simply deleted from the Code)

Historical Context: The Vagrancy Act of 1866 remained on Virginia's books in some form until 1904, when a new law – An Act in Relation to Vagrancy – was passed. It made vagrancy a misdemeanor punishable by a bond payment and good conduct for one year.

The city's fiscal year shall begin on July 1 of every year and conclude on June 30 of the following year. (Added)

§ 8. Vacancy in office of mayor or councilor; vacation of office

Whenever, from any cause, a vacancy shall occur in the office of mayor, the council shall elect one of its members as mayor for the remainder of the term. (under the previous charter, the the council was given the option of filling the position of mayor outside of the council body.)

The 2020 Charter amendment brought the city code in alignment with ordinances passed by the Charlottesville City Council (2004-2006). The current (January 2020) maximum pay in Charlottesville is $18,000 for councilors and $20,000 for the mayor. Charlottesville has one of the highest average salaries for council members in Virginia. State code sets salary limits for members of city councils based on population, ranging from $11,000 to $30,000. laws of the Commonwealth. Elected city school boards are governed by the same guidelines.