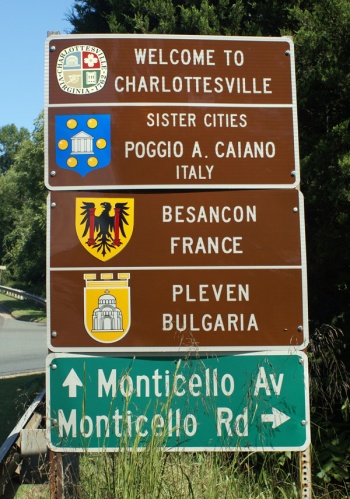 Charlottesville's sister-city program is coordinated by the Sister Cities Commission, and the city is a member of Sister Cities International.[1].

In 2019, the Sister City Commission announced it would seek a Spanish-speaking community as the next sister city. [2] City Council will consider a new city in Guatemala on December 7, 2020. [3]

To commemorate the four cities, the city considered building a clock. The item received a certificate of appropriateness from the Board of Architectural Review on March 15, 2011.[4] However, the project died when the design that won a contest came with a $60,000 cost estimate. City Council had only set aside $25,000 for the project. The Sister Cities Commission decided against fundraising for the balance. [5]

At one point, the city had a sister city relationship with Long Beach, Washington. [6] However, that no longer seems to be the case.