The Buck Island Store is a convenience and gourmet shop located on Route 53 near Buck Island Rd. It is currently named Buck Island BBQ. 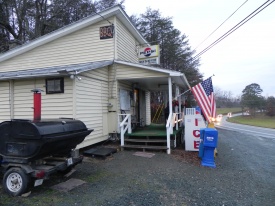 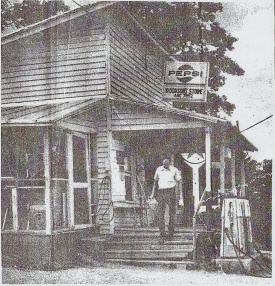 The Buck Island Store around 1980

The Buck Island Store has a storied history. Originally known as Nix Post Office, it took its name from the post office also on the property. Nowadays, the post office building is a shed that seems to be in disrepair. The Store sits on a property including the duplex behind it, the main farmhouse duplex, the old post office, and the fields across the road and behind it. The farm was a 27 acre turkey farm. The store has been run by many entrepreneurs over the years, but the property has had few owners. Most recently, the property was purchased in 1942 by the Mrs. Emily Eppard. Since, her daughter Blanche Eppard inherited the property and later, her niece Merle Bingler inherited it. However, before the Eppard/Bingler family purchased the property, a man only known by the name of Woody owned the property. Mr. Woody was known to have loved dancing and built the dance hall behind the store. Later, Emily Eppard turned the dance hall into the duplex it is today. Mr. Woody lost the property however. He sought to earn more money and found several workers to live in the former post office. He did not charge them rent but instead, he hired them out to clear power lines. One night, when Mr. Woody went to pick them up in his truck, he had taken to drink and wrecked the truck with the men in it. He lived, however he faced charges after one of the men died. Mr. Woody lost the estate and soon, Mrs. Eppard purchased the property at auction.[1] The store became one of the first Texaco stations in central Virginia[2] but lost its gas pumps like many other country stores when the EPA regulations required that the tanks be dug up and replaced. Several entrepreneurs have run the store with various names. After Mr. Woody lost the store, Mrs. Eppard rented it the store to a Roy Sprouse during a few months in 1942 before he was "possibly drafted." Soon after, a Mr. Allen rented the store until his untimely death. The next documentable shopkeepers were the Woodsons who took up shop in 1969. The store was then renamed "Woodsons Store at Buck Island." After around a quarter of a century of Woodson's, the store was renamed again to the colloquial name of "The Buck Island Store." It went through several shopkeepers until 2006 when Bob and Helen Pitts began renting the store.[3]

There have been three separate incidents of murder at this little store. Of the first one, little is known. It was said that "They saw his feet sticking out from under the porch and when they stopped to look, they saw he was dead." The next was a robbery/murder. A man arrived in the store and killed the shopkeeper and his wife. These killings, were both pre-World War II killings, though. The last and most notorious of the killings was a triple homicide in the 40s. First, the man walked into the store and killed the shopkeeper, Mr. Allen, with a baseball bat. He then walked over to the farmhouse where the man and wife living there were killed with the bat. Mrs. Woodson, a later shopkeeper, was interviewed and replied that she warded off any claims that she was "tempting fate." She said, "Besides I'm not going to start worrying about something 'til it happens."[4] There have been no murders since.

Currently, the store is run by Bob and Helen Pitts. David Boyd, a local retired chef, also is involved in the business as the buyer of all of the products including exotic wines and beers. Bob and Helen have known each other since 7th grade but did not get married until 10 years ago when Bob came to Charlottesville to see Helen again. Soon after, they went into business together and began renting the store in 2006. Buck Island BBQ also caters, including weddings, birthdays, office parties, and various other special occasions. Buck Island has catered events such as Old Farm Day in Palmyra, the Fluvanna Wine Festival, and has regularly been catering the MS150 in Charlottesville. As a gourmet shop, Bob does in house wine tastings, but is most known for his Barbeque. The BBQ has 20 ingredients in it. Bob will only tell you the first and last which are Clove and Cayenne respectively, which has garnered the name “CC Rider” from a customer. Bob explains the name by saying, “Clove to Cayenne: Take the ride!” The BBQ has a “juicy, smoky flavor” with a “little kick.” Bob also does specials for holidays including his Cajun Thanksgiving Turkey and Superbowl Ribs and Brisket.[5]