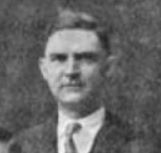 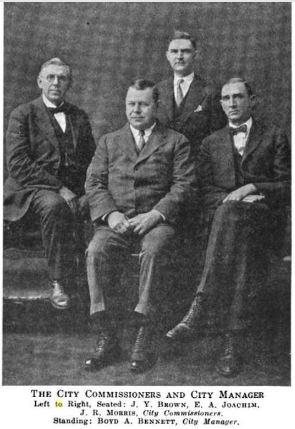 Boyd A. Bennett (1885-1958) was Charlottesville's first City Manager appointed under the new modified commission form of government. Bennett took office on September 1, 1922; his appointment was one of the first acts of the Commissioners upon taking office. [1] [2] [3]

After serving as city manager of Charlottesville for three years, Bennett resigned to take a similar position in Bluefield, West Virginia. His resignation was to effective on September 1, 1925, but offered to remained on the job until October 1, 1925 or anytime previous to that date.[4] Bennett was succeeded by H. A. Yancey.

Bennett resigned as director of Lynchburg’s public works department to become city manager of Charlottesville after being advised that the injunction, to stop the operation of city manager commission form of government in the city of Charlottesville, had been dissolved and he had been asked by the newly elected City Commissioners to take his new duties starting on September 1, 1922. [5]

The city adopted a modified form of council consisting of three members and Mr. Bennett’s appointment was the first under the new regime. He arrived in Charlottesville the afternoon of August 31, 1922 to assumed his new duties the next day, September 1, 1922. Bennett had been city engineer and acting city manager of Lynchburg during the absence of E. A. Beck, city manager.[6]

He was formerly city engineer of Conneaut, Ohio, and had an extensive experience in paving and sewerage work. During his administration as city manager of Charlottesville, public work projects included: twelve mile of improved streets, a modern filtration plant, a total of $50,000 of new sewer lines, six miles of new water distribution mains, eight mile of water connections, thirteen mile of eighteen inch water supply main, seven miles of new gas distribution mains at a cost of $50,000. Bennett also saw that the armory building was completely renovated and renewed and the auditorium made suitable for public assembly of 1,000 or more people

Bennett was born in Pennsylvania and reared in Ohio where be became involved in construction and public works. At the end of his career in public works, Bennett served as city manager of Clearwater Florida from 1947 to 1950. Boyd A. Bennett died in 1958 at aged 72–73. Burial was at Sylvan Abbey Memorial Park, Clearwater, Pinellas County, Florida.