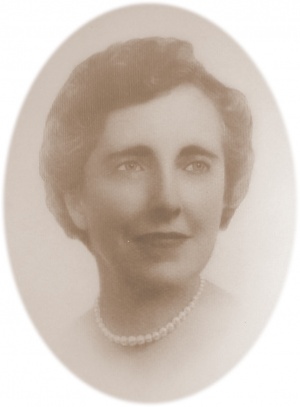 Betty Davis Via (née Betty Elise Davis; 1901-1993) was a Charlottesville teacher, administrator, author[1], and artist.[2] Jackson-Via Elementary School was the City's first school building that was planned and built as a desegregated school, hence being dually-named after both a Black educator, Nannie Cox Jackson, and a white educator, Via.

Via was born in Clifton Forge, Virginia. She received her Bachelor's degree from State Teachers College at Harrisonburg, at what would later become James Madison University. She was a descendant of John Penn, a signer of the Declaration of Independence, and was an active member in the Daughters of the American Revolution.

Via was an educator in the City schools from 1927 to 1965. She taught at Venable Primary until becoming principal in 1945. When Johnson Elementary School opened in 1955, she became its first principal, and held that position for 10 years. On October 10, 1952, Betty (age 51) married Guy Forrest Via (age 61) a widower.

Upon her death, she was praised by Booker T. Reaves, former principal of the Jefferson School:

She had an excellent personality, and was liked by all of those who worked with her. She liked her teachers and she liked the people she worked with.  As a matter of fact, I don't remember any conflicts involving her in all that time.

Via wrote several children's books, including Monticello Scrapbook (1938), Young Tom Jefferson's Adventure Chest (1942), Scotchtown Tale (1946), Monticello's Animal Kingdom (1967), Thomas Jefferson and The Indians (1969), and Sunshine and Shadows over Little Mountain (1982), and is purported to have written hundreds of children's stories, including The Fourth-of-July Goose: A Monticello Story (1958). Her books frequently perpetuate the "happy slave" myth, refer to enslaved individuals simply as "servants", use racist archetypes for Indigenous and African-American characters (e.g., "grinning negro boy"[sic], "old Mammy"), use an imagined dialect for the dialogue of those characters, and uses what we now consider racial slurs, such as negro[sic], Injuns, redskin, and squaw.

In the preface of Monticello Scrapbook, Via states:

The events included in the Monticello Scrapbook are historically authentic.  In order to make the stories more alive I have in some cases related what the characters might have said and described the reactions which they might have experienced to well known situations.

The following is a selection from the story "Home Again", describing Thomas Jefferson's return to Monticello after having served as a diplomat in France. It was around this time that Jefferson began his relationship with Sally Hemings.

It was the day before Christmas eve, 1789. For weeks there had been great Christmas preparations at Monticello. Pudding and frosted cakes had been made. Every room had been dusted and polished until the beautiful furniture and floors fairly shone. The children of the servants had made holly wreaths for the windows and hauled pine logs for the fireplaces. Bright turbans and gay aprons had been made ready and now they were donned in great excitement. For weeks the word had passed around "Marster's comin'," "Marse Tom's comin'!" "Miss Martha and Miss Mary's comin'!"

And at last the day had arrived and Mr. Jefferson and his two daughters were returning home after an absence of Europe of five years.

Mr. Jefferson had written to his overseer the news of his return and the overseer had told the negroes. Upon their request the 23rd was declared a holiday in honor of the master's home coming and all of them had gathered from Mr. Jefferson's farms. No one wanted to miss the happy event. Old and young, women and children gathered on this hillside. Singing and shouting and calling to each other, they grew impatient with waiting and walked down the mountain to meet the carriage-and-four at Shadwell, Mr. Jefferson's birthplace. Eagerly they vied with one another to be the first to see the beloved face. How they cheered and cried and sang when they saw him! Crowding around the carriage they tried to touch his hands or feet or even his coat. Smiling, the master greeted them heartily, calling each by name. In the merry confusion, they unhitched the horses and lining up beside the carriage pole, pulled it themselves up to the beautiful portico of Monticello. One by one they quieted down. Many an eye was moist with memories of other days when Mr. Jefferson had brought his bride to Monticello.

"Miss Martha done growed up, bless de Lawd," exclaimed an old Mammy standing near, "An' look at Miss Mary, ain't she beautiful?" called out another. And Maria, now in her 11th year, was more beautiful and lovable than ever. Martha was a tall and stately young lady of seventeen.

Their charm and beauty and lovely French clothes overawed the servants, and they fell back to let them enter. Up the front steps the master went with a beloved daughter on each arm, and Martha Jefferson walked across her father's threshold knowing that she would be more than ever his companion and the mistress of Monticello. 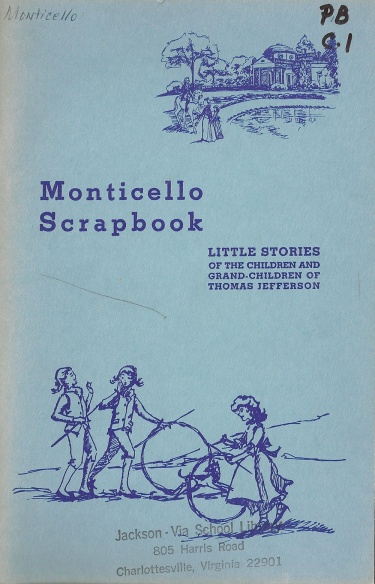 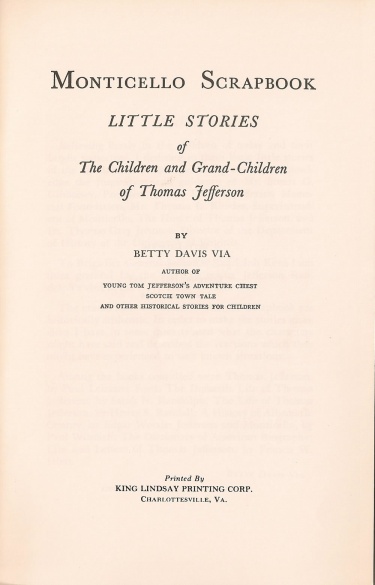 This is a young adult novel telling stories about a young Thomas Jefferson. It contains numerous stereotypical Indigenous and African-American characters, and presents all of their dialogue in dialect. For example:

"Marse Tom," he gasped. "Look at dis here. I heered a bobwhite call and den it come flyin' through de air and stick right in a stump near de woodpile whar I'se asittin'. Marse To, it's Injuns. Is we gwine to be attacked?" (p. 178) 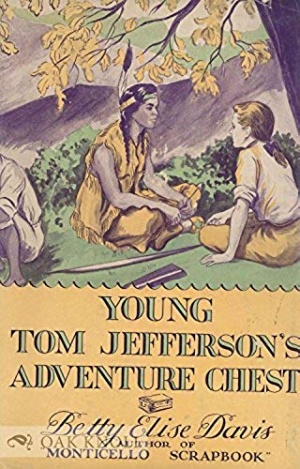 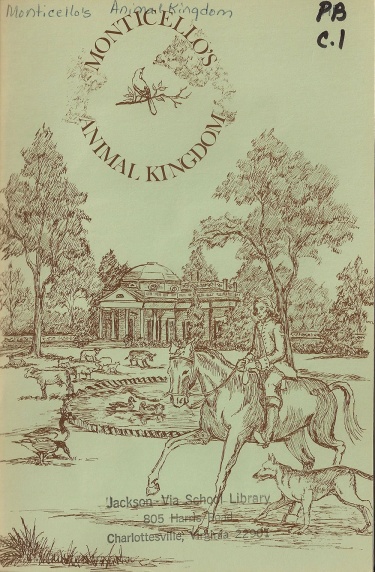 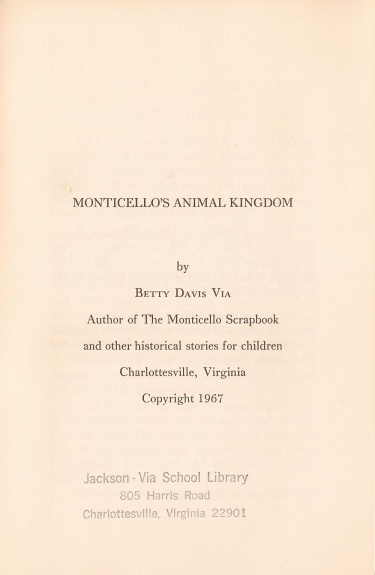 Thomas Jefferson and The Indians (1969) 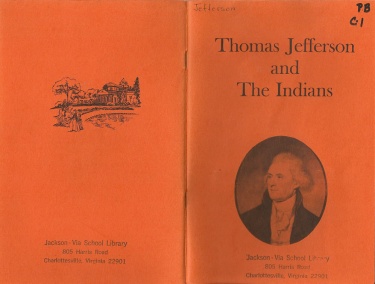 Back and front covers, children's book by Betty Davis Via. 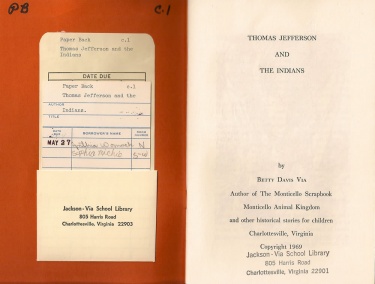 Inside front cover and facing page, children's book by Betty Davis Via.

Sunshine and Shadows over Little Mountain (1982) 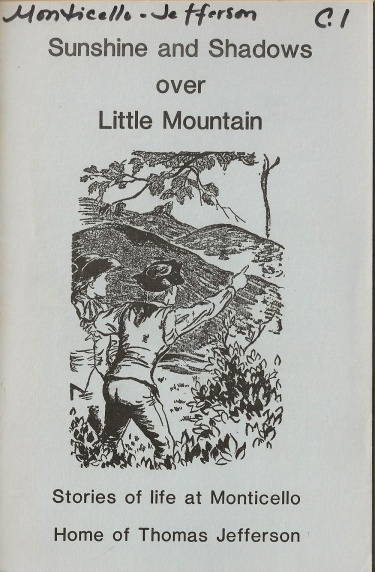 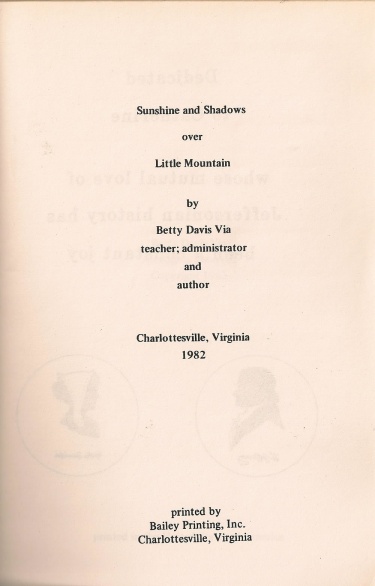 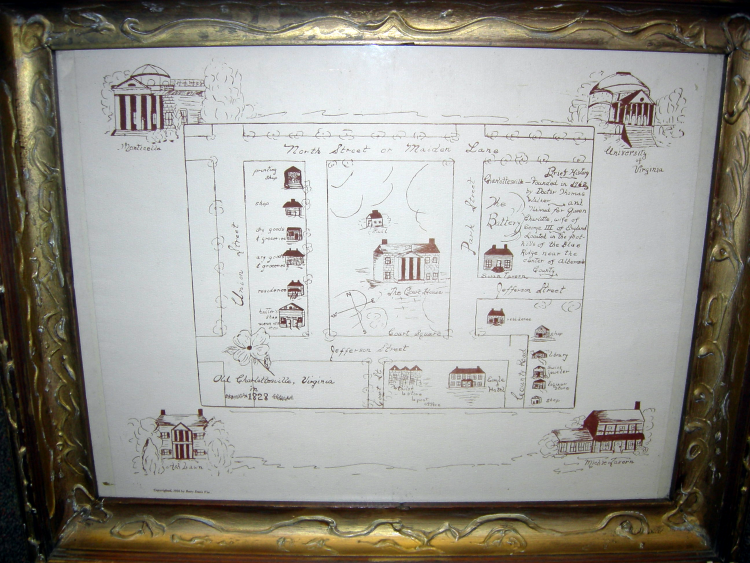 Framed art by Betty Davis Via. 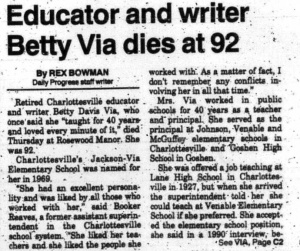 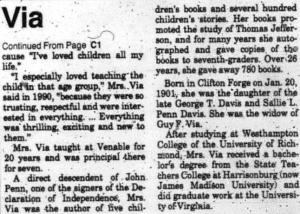 Via was the author of five children’s books, most as a result of her research on Thomas Jefferson. Several hundred of her stories were published in children’s magazines. She co-authored a series of five textbooks on the teaching of reading. She was honored with two awards for poetry. In 1970, Via was honored by the Charlottesville City School Board through the giving of her name to the then new school on Harris Road, thus the Via part of Jackson-Via Elementary School.

Via was active in the field of education for a total of 42 years. In all those years, she stressed academic basics, character values, and good citizenship."[3]