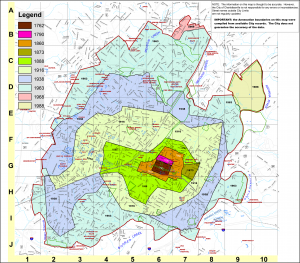 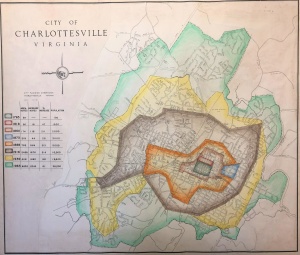 City of Charlottesville: 6.434 square miles. Effective December 31, 1938, more than 2,200 former county residents became citizens of Charlottesville following annexation of adjacent Albemarle urban areas of the city. By court order, the annexation order became effective midnight December 31, 1938/January 1, 1939. Under the verdict handed down on November 10, 1938 by the three-judge court appointed by Governor Price, the city was awarded an area which included Towler’s Addition, McIntire Park, Carlton Addition, Meadownbrook Hills, Belmont (Big Hill), Park Street, extended, Ivy Terrace and Fry’s Spring sanitary district. The only contested properties exempt were those of attorney Homer Richey and attorney William Chamberlain. Annexation of the University proper was considered by the court in view of the Virginia statue which says the annexed territory must be a compact body, but attorneys for both sides stipulated they did not seek to incorporate the institution. [2] [3]